Sometimes, there are some disasters that claim the lives of some and spare others. It could be an accident or a natural disaster.

What makes some people survive against all odds and some people perish? Are these random events with random results or are they orchestrated? Could there be an invisible hand pulling the strings?

According to scripture not all disasters are random.

“And the Lord said unto him, Go through the midst of the city, through the midst of Jerusalem, and set a mark upon the foreheads of the men that sigh and that cry for all the abominations that be done in the midst thereof. Slay utterly old and young, both maids, and little children, and women: but come not near any man upon whom is the mark; and begin at my sanctuary. Then they began at the ancient men which were before the house.”

The background to this verse is; God sent some heavenly beings to bring judgment on the inhabitants of Jerusalem. However, not everyone was to die, some were to be spared. They were those who had “the mark”.

To the human eye, survival seemed random but from a heavenly perspective it was conditional.

Those who survived were; holy. They were the men that “sighed and cried” for the “abominations” of the land. Holiness places an invisible mark of protection on your forehead.

Lead a holy life because in times of disaster that mark could save your life. 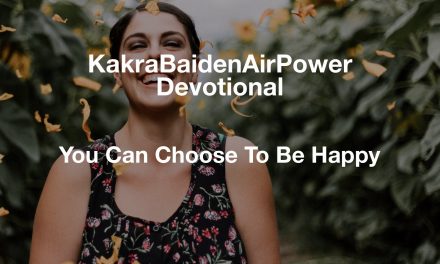 You Can Choose To Be Happy

How To Deal With Bad News!