Don’t Fight Your Own Prayer!

Jonah 3:10
“And God saw their works, that they turned from their evil way; and God repented of the evil, that he had said that he would do unto them; and he did it not.”

I have come across people who have prayed, fasted, and cried to the Lord for their prayers to be answered. Sometimes, instead of being thankful, these same people become angry with the Lord when their requests are granted.

Jonah was sent to Nineveh to preach the Gospel. The people repented after hearing his message, so God forgave them.

This was Jonah’s reaction;

“But it displeased Jonah exceedingly, and he was very angry.” (Jonah 4:1)

I once prayed with someone for her husband to stop cheating on her. Later the man broke up this relationship and returned to his wife. His wife, who had prayed for his return, was now angry and unwilling to accept him back.

I have seen people pray for a husband and after the marriage fight that same husband till he leaves the home. I have also seen people pray desperately for a job and later complain bitterly about the same job.

Instead of fighting our prayers, let’s be thankful to God for answered prayer!

The Ways Of Death! 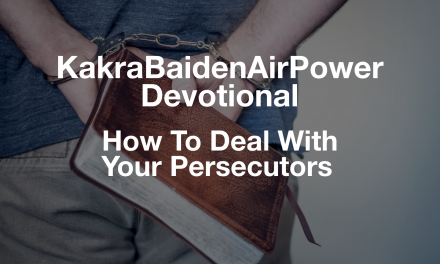 How To Deal With Your Persecutors

Don’t Be Defined By Bad Experiences!