Take Up Your Responsibility! - Kakra Baiden

Take Up Your Responsibility!

Jonah 1:1-3,5
“Now the word of the Lord came unto Jonah the son of Amittai, saying, Arise, go to Nineveh, that great city, and cry against it; for their wickedness is come up before me. But Jonah rose up and flee unto Tarshish from the presence of the Lord, and went down to Joppa; and he found a ship going to Tarshish: so he paid the fare thereof, and went down into it, to go with them unto Tarshish from the presence of the Lord. But Jonah was gone down into the sides of the ship; and he lay, and was fast asleep.”

One day when Jesus appeared to me, I ran to my bedroom and hid myself in my wardrobe. When I closed the wardrobe, the presence of God was there. I ran out of the wardrobe and went under the bed, but the situation was no different; the presence of God was still there. I came from there and lay on the bed and said to myself, “God is truly everywhere.”

I believe you can never run away from God. Jonah ran away from God because he did not want to take up the responsibility He gave him: to go and preach to the people in Nineveh. The word “responsibility” means what you are supposed to do. Thus, your duty!

When you read the whole story, you will realize that right from the beginning Jonah was a person who did not like responsibilities. He might have said to himself, “I do not want to go and preach to anyone. I do not want trouble.” He wanted to be left in peace. Even when the ship was sinking and their lives were in danger, he was not concerned about his own life. He slept!

Finally, Jonah realized the need to take up responsibility for his own actions and be saved from perishing.

I have encountered people who have placed the responsibility of their lives in the hands of others. Two men came to my office one day. One of them was about sixty years old. The other man said to me, “Pastor, this man needs help. His parents are dead and he needs a helper.” I was shocked, because this was a sixty-year old man whose parents were supposed to be dead.

What kind of help was he looking for? Probably his parents died early, and so throughout his entire life he grew up with that mentality. My response to him was that he needed to go and help himself.

Do not shift the responsibility of your life unto someone! Learn to be responsible! 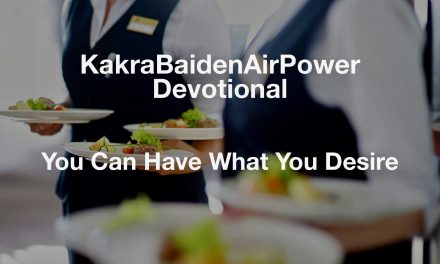 You Can Have What You Desire