I got a job and was promoted that same day after listening to your messages!

I lost my job in December 2017 just a year after marriage. I struggled to have a job for close to a year and a half. I was very depressed because almost all the companies I applied to, mysteriously refused to employ me even though I was qualified.

I then decided to listen to your messages to encourage myself. Last year November, I was called for an interview and was also promoted. That same day I was employed in a senior position.

God Has Done It For Me!

﻿The Bible Verse That Changed My Life. 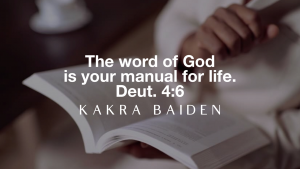