The Dangers Of Insecurity - Kakra Baiden

The Dangers Of Insecurity

Exodus 1:10
“Come on, let us deal wisely with them; lest they multiply, and it come to pass, that, when there falleth out any war, they join also unto our enemies, and fight against us, and [so] get them up out of the land.”

One of the diseases that afflict the human soul is “insecurity.” It afflicts the poor, the rich, the great and the small. Pharaoh was the king of Egypt but the presence of unarmed peaceful slaves made him insecure. He felt unsafe when nothing was threatening him.

There are insecure wives, husbands, workers, pastors and the list goes on. Insecurity makes people take cruel and unreasonable decisions at the expense of others in order to achieve security.

Pharaoh decided to kill all babies. Insecurity makes people attack those who are close to those they love because they perceive them as a threat. It can cause a husband to drive away all the male friends around his wife including office colleagues.

Insecure people fail to enjoy what they have; Pharaoh could have embraced the Jews as fellow citizens and enjoyed part of the blessing of Abraham; “Blessed are they that bless you!”Insecurity is an internal problem not external.

Security can only be found in God and His word. Believe what He has said about you and let him take care of your security. 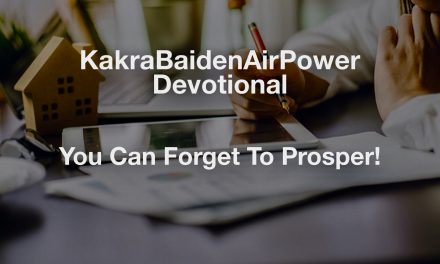 You Can Forget To Prosper!

What Did You Buy For Me?

How To Deal With Bad News!