Don’t Cut Up The Bible!

I once counseled a man who had marital problems. It was difficult advising him because he rejected the portions of scripture that were unfavorable to him and accosted the favorable ones. It was as though, he was cutting out the portion of the Bible he did not like from its pages. His selective obedience ended his marriage.

There was once a King in Israel called Jehoiakim. One day the book of Jeremiah was read to him. He took his knife and literally started cutting portions of the scriptures he did not like.

Jeremiah 36:23
“Whenever Jehudi had read three or four columns of the scroll, the king cut them off with a scribe’s knife and threw them into the firepot, until the entire scroll was burned in the fire.”

Are you guilty of the same? Are you cutting the scripture in pieces in your heart?

The time has come to embrace all scripture; favorable or unfavorable and be blessed by God’s word.

The Anointing of Correction!

The Coming of Titus

The Things I Cannot Change! 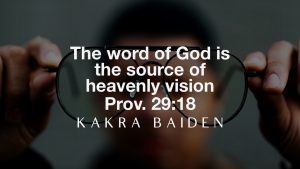