How To Respond To Your Dreams | Kakra Baiden

How To Respond To Your Dreams

Seven years of great abundance are coming throughout the land of Egypt, but seven years of famine will follow them. Then all the abundance in Egypt will be forgotten, and the famine will ravage the land. The abundance in the land will not be remembered, because the famine that follows it will be so severe. The reason the dream was given to Pharaoh in two forms is that the matter has been firmly decided by God, and God will do it soon. And now let Pharaoh look for a discerning and wise man and put him in charge of the land of Egypt.

He told Pharaoh how to respond to the dreams.

He said let Pharaoh look for a “discerning” man. The original Hebrew meaning of this word is to separate mentally or to understand. To respond to your dream you must understand the issue. In this case, there was the need to understand the famine and its implications on the nation.

This is the ability to know what to do. You can know a problem but what to do is another thing. You need wisdom to respond to your dreams.Kakra Baiden

Can We All Just Get Along?

Protected by the Word 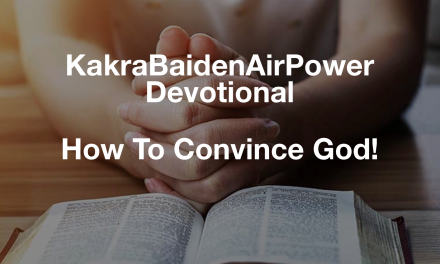