“Nevertheless the men rowed hard to bring [it] to the land; but they could not: for the sea wrought, and was tempestuous against them…So they took up Jonah, and cast him forth into the sea: and the sea ceased from her raging.”
Jonah 1:12,15

In the story of Jonah, a storm occurred on the sea for his disobedience to the Lord. After trying all options to stop the storm without success, the sailors finally decided to deal with the root cause of the problem; Jonah. They threw him into the sea.

Sometimes, when we have problems, we try to avoid it without necessarily confronting it although we may know the solution. Like Jonah, there are people who are rowing around their problems whilst the main cause remains in the boat. The time has come for you to deal with the problems in your life.

Although the sailors knew that Jonah was the cause of their problem, they tried to solve it using other means. Finally, they took him up and cast him into the sea. Problem solved!

There are people in relationships that will not lead to marriage yet decide to stay on because they have not faced the stark reality. I mean Johnny does not return your calls when you call him; he does not reply your emails. Sending him a big Valentine’s Day card like a bed sheet may not change the situation. Forget about it; throw him into the sea!

If there is someone in your shop who is always stealing from you, the time has come to stop trying to change him; you cannot. It is time to sack him! Sometimes, it is time to stop rowing because the harder you row, the more problems you may encounter.
It is time to stop playing around. Face the cold hard facts and deal with the root of your problem. 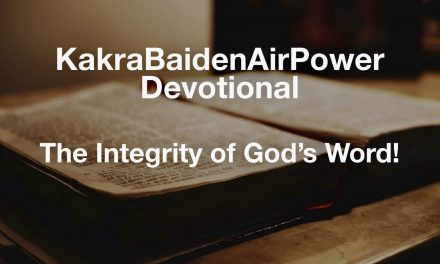 Thanks The Integrity of God’s Word!

How To Exercise Good Judgement!

Point Of No Return!