How To Know The Will Of God Through Visions! | Kakra Baiden

How To Know The Will Of God Through Visions!

In the Book of Acts, God told Paul he had chosen him to know His will. He was going to see and hear from the spirit realm to be able to do this. In other words, he was going to grant him dreams and visions.

“And he said, The God of our fathers hath chosen thee, that thou shouldest know His will, and see that Just One, and shouldest hear the voice of his mouth.”

Do you want to have dreams and visions? I will show you one way to achieve this. Paul had an abundance of visions and revelations from God because he was chosen to have them.

It is not everything we can achieve by our efforts; some things are as a result of God’s choices. We can fast and pray hard for things and never receive them if God never chose or intended for us to have them. Mary Magdalene was chosen to see Jesus first after His resurrection.

Pray that God will choose you to have dreams and visions. If He does, you will have dreams, visions, and revelations without sweat!

The Value of People! 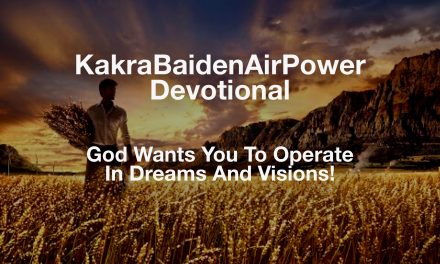 God Wants You To Operate In Dreams And Visions!