Why Some Women Fall Prey To Evil Men! | Kakra Baiden

Why Some Women Fall Prey To Evil Men!

I have met countless women, who have fallen prey to evil men who have taken advantage of them financially, sexually and emotionally. What can cause a level-headed responsible woman to fall for a small time crook?
In 2 Timothy 3:5-6, Paul wrote about this phenomenon. It reads, “Having a form of godliness, but denying the power thereof: from such turn away. For of this sort are they which creep into houses, and lead captive silly women laden with sins, led away with divers lusts.”
These men creep or move slowly into houses. Their agenda is unfolded slowly and covered with deception. Why are some women deceived?
Paul gives the answer; because they are laden with sin and controlled by evil desires. It takes righteousness to discern evil. Have you ever had your bath and realized your clothes smelled soon after? Why did you not smell it the first time? You needed the contrast of clean and unclean to know the difference. Darkness is always exposed when it is contrasted with light.
Let us lead righteous lives in order to be able to discern between evil and good men!
Kakra Baiden 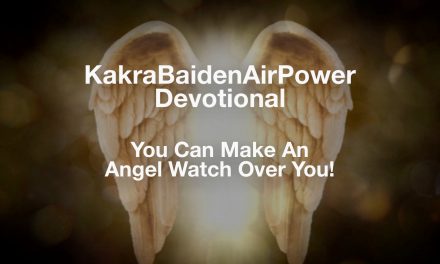 You Can Make An Angel Watch Over You!

The Waters of Strife!