Sin Will Destroy Your Finances!

“Righteousness exalteth a nation: but sin is a reproach to any people.”
Proverbs 14:34

In Luke  15:11-16, the Bible says “And he said, A certain man had two sons: And the younger of them said to his father, Father, give me the portion of goods that falleth to me. And he divided unto them his living. And not many days after the younger son gathered all together, and took his journey into a far country, and there wasted his substance with riotous living. And when he had spent all, there arose a mighty famine in that land; and he began to be in want. And he went and joined himself to a citizen of that country, and he sent him into his fields to feed swine. And he would fain have filled his belly with the husks that the swine did eat: and no man gave unto him.”

Let us stop here. Only five verses and he is already broke. This guy had a lot of money because the bible says his father gave him half of his wealth.

Eve went window shopping and brought a bill Adam could not pay.

Unrighteous living is one sure way of dissipating your money. Live a holy life and you will find out holiness conserves money.

I thank God I do not have two wives. It would have doubled my expenditure. I also do not drink alcohol; it reduces my health bills and bills in general.

Decide to live for God, be holy and watch your expenditure shrink.

What Do You Do When You Have No One To Help You! 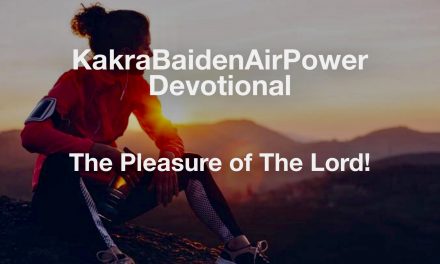 The Pleasure of The Lord!