Luke 1:6-7 reads “And they were both righteous before God, walking in all the commandments and ordinances of the Lord blameless.And they had no child, because that Elisabeth was barren, and they both were now well stricken in years.”

Zachariah and Elisabeth, John The Baptist’s parents were righteous people but they

were barren. Sometimes, there is the tendency for Christians to believe that because they are righteous they will not have any challenges. This couple watched as their dream of having a child faded away. You can imagine their frustration and the ridicule they might have been subjected to. I am sure someone said “if you are so good why are you barren?” Sometimes people may look at your deficiencies and say if your God is good why are you barren or unemployed or sick and the list goes on.

Finally, they received an angelic visitation and gave birth to John who was conceived

that is related to the promise and also according to His will.

Kakra Baiden
AIR POWER DISCUSSION-ANSWER
My wife and I have been married for over 10 years without a child. There is nothing wrong with us medically. However, all attempts to conceive has proven futile. I feel God has forsaken us. I need your advice.”

The Workings of the Kingdom! 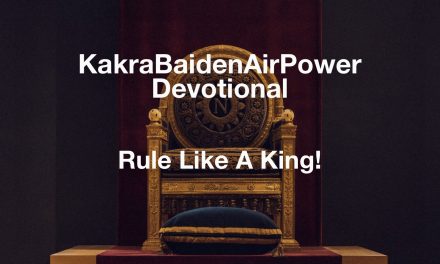