Because Of the People! | Kakra Baiden

Because Of the People!

“And David perceived that the Lord had confirmed him king over Israel, for his kingdom was lifted up on high, because of his people Israel.”

Sometimes, when we are promoted, have become wealthy, powerful or married to someone for a long time we think we don’t need them anymore.

This is because at that point they may be dispensable and their role may not be critical. It is important we remember that God promotes us not because we are special but because of his people. He promotes us to advance the interests of “his people.”

Politicians gain power and sometimes turn round to abuse and exploit the very people who voted for them to be in power. When they are in power, they may fail to listen to the very people they claim they represent.

Some spouses abuse their partners as they grow old because maybe now; the kids are grown, they are financially strong and have met nicer, or fresher people.

Pastors can abuse and exploit the very congregation who have helped them to make their ministry what it is.

Like David, let us remember that promotion is for the service and good of mankind; it is not to please ourselves. 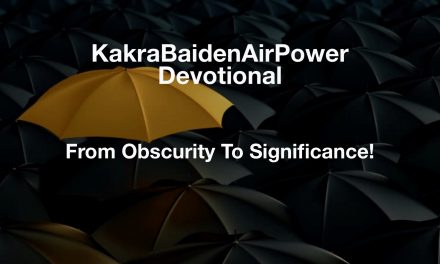 From Obscurity To Significance!

The Nature of Stubbornness!

Why Some Become Poor!